A couple of years ago I made the decision to switch from full-time employment to working freelance. I’d spent a lot of time hiring freelancers to help deliver projects whilst at agencies (via recruiters) and it seemed like they had all the fun bits of being a designer but none of the crap, so I made the jump and have been here ever since.

Working with recruiters as the client was never easy, I always seemed to spend a lot of time and effort filtering out candidates with the wrong skills or being told candidates had ‘mobile experience’ when the only thing they had done was a few iPhone mockups for a pitch. Recruiters are suppose to reduce pain, not increase it, I eventually saw it as a necessary evil.

Now I’m the one looking for freelance work it’s not a surprise to find out the experience is the same. I get dozens of time consuming emails, phone calls and LinkedIn requests each week which amazingly amount to nothing.

Recruiters misreading my profile and skill set matching me with unsuitable jobs, contacting me with hardly any details on the role or they shroud the whole thing in secrecy assuming that I would just take their word for it that the client and project are ‘industry leading’. The lack of transparency is infuriating.

Recruitment agencies feel broken and in need of disrupting.

I was once looking through some CVs with a colleague and had a discussion about how great it would be if talented designers started their own recruitment agencies.

Rather than just matching words from a brief to words on a CV or LinkedIn profile, they would really understand your needs or skillset and you could trust their judgement when they suggested a candidate or project. They would be honest and up-front with commision rates and cut through the bullshit and get you great projects to work on.

As it turns out that’s exactly what is happening.

I’ve been noticing more and more designers are making moves to replace recruitment agencies with their own solutions. What’s interesting is the different approaches each has taken. I’ve listed the ones I’ve found over the last few months: 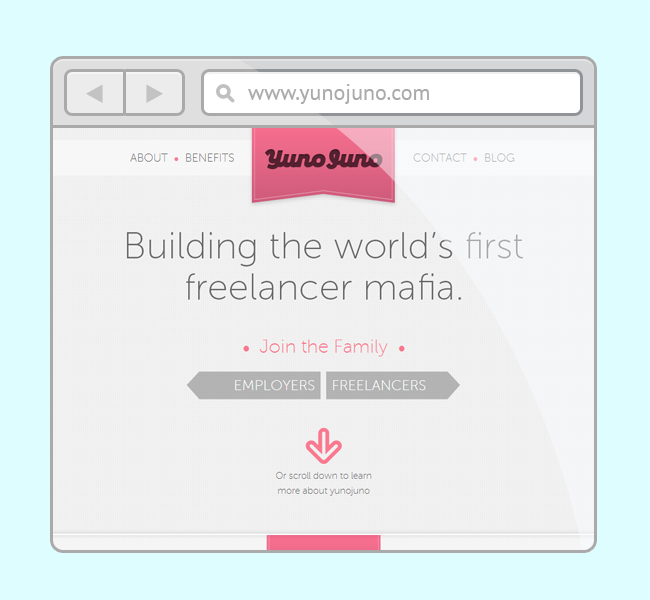 “We ain’t recruiters. Just a few creative and tech folk who want to build a decent community of people hungry to do good work.”

Yuno Juno was set up to let talented freelancers connect directly with the companies that want to hire them and take the pain (and middlemen) out of the process. They are transparent about their costs (5% for employers, free for freelancers)

“Folyo is a private designer community. Post your project, and we’ll send it to a list of hand-picked designers all over the world.”

To keep the quality high, the designers on Folyo must be accepted by the guy who runs it, a top designer called @SachaGreif.

It costs $100 to post a job and designers are the ones get in touch if they are interested and available. If not designer is found, the fee is refunded.

I recently signed up and the first email I got had a couple of good product design projects with respectable budgets. 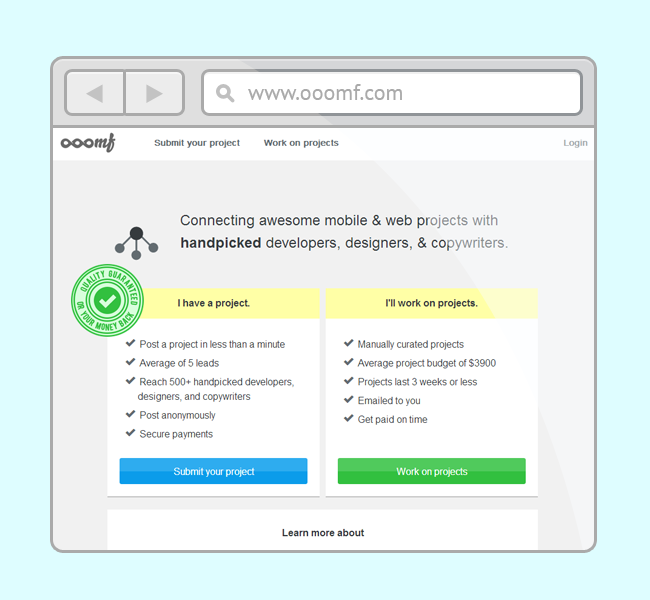 Ooomf is similar to Folyo in many ways in that it’s a handpicked private community and members get in touch if they are interested in the job posted.

Here’s the story behind Ooomf

“Before starting ooomf, most of our founding team worked as independent developers and designers.
Too often, however, our time was spent searching for high quality projects to work on. Filtering through project proposals and identifying those that had respectable budgets, briefs, and timelines was all-too-painful and the not knowing where your next project would come from was a fear that we regularly lived with.
Once we founded ooomf, we also noticed issues on the other side of the table – where to find quality talent to work on our projects?  We started ooomf to solve these problems.”

And here’s how it works:

“You can post a project on ooomf and if you’re project is approved, you’ll gain access to our handpicked community of 1,000+ developers, designers, and copywriters.

Each project that is submitted is reviewed by us and the ones that meet our guidelines are sent out by email weekly or bi-weekly (based on the quality of the supply) to our curated community of web and mobile professionals.

Acceptance to our community as a developer, designer, or copywriter is by invite-only to ensure that we build it right from the start.”

Juiicy is a completely different approach where designers who are too busy to take on work post the job they can’t take on and get a cut if someone else does it, effectively turning designers into recruiters. (Read more here)

Created by Julian Renvoye, a fantastic designer from San Diego, Juiiicy could be the most disruptive out of the bunch. I have to turn down several projects a week, if I could make 10% off each one, then why wouldn’t I use Juiiicy instead of turning them away?

I’ve no doubt we’re just seeing the beginning of job sites for designers by designers. Let me know if you’ve tried any of the above or know of anymore sites to add to the list.

I’m currently using Dribbble (also started by a designer) as my primary source of freelance work, signing up for the Pro account is the best $20 I’ve ever spent so I recommend trying that out too.

A couple of great looking additions in the comments and other places,